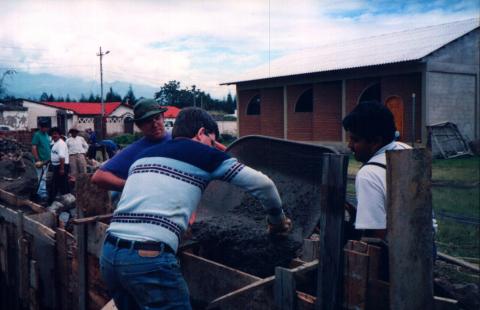 God by His very nature is self-reliant and self-sufficient. He doesn’t need anything from us, His creation. We can not give to God anything that is not already His. So, as we have been speaking recently, why should we give to God and how exactly can we do that if He owns all anyway?

God by His very nature is self-reliant and self-sufficient. The earth is the Lord’s and the fullness thereof, the world and those who dwell therein (Psalm 24:1).  He doesn’t need anything from us, His creation. “For every beast of the forest is mine, the cattle on a thousand hills. I know all the birds of the hills, and all that moves in the field is mine. If I were hungry, I would not tell you, for the world and its fullness are mine.” (Psalm 50:10~12) We can not give to God anything that is not already His.

So, as we have been speaking recently, why should we give to God and how exactly can we do that if He owns all anyway? Every man shall give as he is able, according to the blessing of the LORD your God which He has given you. (Deuteronomy 16:17) Our time, our money, our body, our talents, our mind, all of it belong to the Lord. In addition… you were not redeemed with perishable things like silver or gold from your futile way of life inherited from your forefathers, but with precious blood, as of a lamb unblemished and spotless, the blood of Christ. (1 Peter 1:19~20 NASB) As Christians, this is doubly so since Christ bought us with His own blood.

So, what does it mean to give to the God who owns everything? Let’s look at the example of the early Macedonian churches for clues. (2 Corinthians 8:1~15 )

Giving as an act of sacrifice

We want you to know, brothers, about the grace of God that has been given among the churches of Macedonia, for in a severe test of affliction, their abundance of joy and their extreme poverty have overflowed in a wealth of generosity on their part. For they gave according to their means, as I can testify, and beyond their means, of their own accord,  2 Corinthians 8:1~3
And he said, “Truly, I tell you, this poor widow has put in more than all of them. For they all contributed out of their abundance, but she out of her poverty put in all she had to live on.” – Luke 21:3~4

Giving as an act of justice and compassion

…begging us earnestly for the favor of taking part in the relief of the saints—   2 Corinthians 8:4
Do not withhold good from those to whom it is due, when it is in your power to do it. – Proverbs 3:27
And he would answer and say to them, “The man who has two tunics is to share with him who has none; and he who has food is to do likewise.” – Luke 3:11

Giving as an act of worship

…and this, not as we expected, but they gave themselves first to the Lord and then by the will of God to us. – 2 Corinthians 8:5
But who am I, and who are my people, that we should be able to give as generously as this? Everything comes from you, and we have given you only what comes from your hand. – 1 Chronicles 29:14

Giving as an act of thanksgiving

Every man shall give as he is able, according to the blessing of the LORD your God which He has given you. – Deuteronomy 16:17

Giving as an act of applied faith

What good is it, my brothers, if someone says he has faith but does not have works? Can that faith save him? If a brother or sister is poorly clothed and lacking in daily food, and one of you says to them, “Go in peace, be warmed and filled,” without giving them the things needed for the body, what good is that? So also faith by itself, if it does not have works, is dead. – James 2:14~17
Give, and it will be given to you. A good measure, pressed down, shaken together and running over, will be poured into your lap. For with the measure you use, it will be measured to you. – Luke 6:38

Giving as an act of love.

If I give all I possess to the poor and give over my body to hardship that I may boast, but do not have love, I gain nothing. – 1 Corinthians 13:3

Story time
Almost twenty years ago, I was a part of a short-term mission team to Pifo, Ecuador. In the summer of 1997, we went  to help Pastor Ramiro and Mercy Baez at Good Shepherd Church to build a small school building there. Our church team raised support and supplies and we each paid our own way and took vacation from work. Each day we worked in the hot sun moving dirt and bending metal for the foundations. It felt like a very pious and sacrificial undertaking. And we were happy to do it.

At the end of our trip an old lady stopped by with a basket of eggs and a few limes.  This is not so uncommon. There are many poor people there and we thought she was peddler. She approached Pastor Baez but he began to quickly turn her away.  Finally, Pastor Baez gave in and escorted her into his home. She left smiling with an empty basket.  She spoke a different dialect than what our guide knew. So, he guessed that she was trying to take advantage of the “rich foreigners.”

But during our mid-morning break, Mercy came out with a snack made with the eggs and limes.  As we ate Pastor told us the real story. She was a poor widow in the area and heard that we were here. She felt the Lord tell her to give the eggs and limes to give us strength. The Pastor argued with her that she didn’t have enough to eat. But he said that she begged him to take the eggs and that she felt she would be in sin to keep them now.

We sat there with lumps in our throat and tears in our eyes as we tried to finish the food that we so graciously given. It’s true that we had traveled thousands of kilometers, spent lots of money, and gave up our free time. But all of this seemed like nothing compared to that simple sacrificial act of an old lady. I never was able to meet her again to thank her but that was a valuable lesson for me. I am sure her name is written in the Lamb’s book of Life.

These things are important. We can not know the impact and sometimes we can feel the lighten of out wallets or the weight on our shoulders. However, they are impactful and God is rejoicing as we give to others and ultimately to Him.