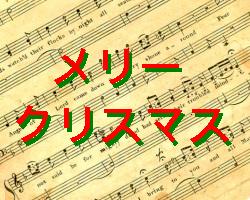 This is a loose translation of a speech I wrote for Japanese class and delivered in 2006/12/24 at CrossRoads Chapel (as well as other places).

Folks, when you were a child what did you look forward to at Christmas time? Presents? Songs? Special Food?

When I was a child, I would celebrate Christmas with my family like those around us. And although I always looked forward to opening all the presents that would be given to me, what I looked forward the most was to sing the joyful songs of Christmas.

To be honest, I was not sure why I liked to sing those songs. For me, The lyrics were always mysterious and difficult to comprehend as they centered around a story from a time long ago in a distant, foreign land with shepherds, angels, and a mysterious star. And they all focused on the extraordinary birth of an baby named Jesus (who I cared little about, although I felt I should).

However, hearing or singing that lovely music would often cheer me on the bleak and rainy winter nights in South Carolina. Actually, at other times of the year when I was sad or lonely, I would secretly sing bits and pieces of Christmas songs like, “Gloria in excelsis Deo” (although I didn’t know what it meant).

Then one summer’s day when I was 24, I started to believe that God loves each of us (including me) and gave his son Jesus for us. So when I sang the songs that I loved as a child that Christmas, I was amazed that the words finally made sense. It was just as if I had been studying Latin and for the first time correctly translated “Gloria in excelsis Deo” to mean “Give glory to God in the highest!”

So, why are these songs so magnificent? Sure, the stories described are important and the music is beautiful. However, the main reason those songs are so magnificent is what the songs were designed to be used for. What’s that you ask? … Gloria in excelsis Deo!