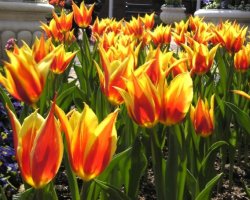 (Photo: Observing a few “lilies” (tulips) of the field at “Huis Ten Bosch”)

I joined a group from Kyoto Assembly Church on a weekend excursion to Kyushu, the southern most main island in Japan. We traveled by ferry from Osaka and spend Saturday traveling and visiting “Huis Ten Bosch”, a theme park design based on Holland. Since the place was filled with tulip gardens, I guess it’s not surprising the verse that came to mind but the passage seemed to follow me as we later traveled to Nagasaki for other reasons.

“Observe how the lilies of the field grow; they do not toil nor do they spin, yet I say to you that not even Solomon in all his glory clothed himself like one of these. But if God so clothes the grass of the field, which is alive today and tomorrow is thrown into the furnace, will He not much more clothe you? You of little faith!”
– Matthew 6:28-30 (NASB)

When we arrived in Nagasaki, we first visited the 26 Martyrs Memorial. This was in memory of the Catholics martyred after the newly former Shogun government outlawed Christianity in 1587.Â  They were captured in Kyoto and Osaka and forced marched to Nagasaki to be crucified in 1597.Â  One of the most powerful things at the museum was a final speech of one of Japanese martyrs, Paul Miki, saying that he was not being executed for committing a crime but only because he believed in Jesus. He finished by saying that just as Jesus forgave on the Cross, he forgave the Shogun for his actions. And even knowing the persecution that awaited them, he still commended people to accept Jesus.

(Photo: The group waiting for the train at an old style station)

Later we visited Oura Chapel, possibly the oldest standing church building in Japan. It is also a memorable site because this was where the “kakure kirishitan” (“hidden followers”) from Urakami revealed themselves to the French priest Bernard Petitjean at Oura in 1865. They had survived through “300 years of fierce persecution” by hiding their religious practices in Buddhist and Shinto customs.

On Sunday, we visit Nagasaki Baptist Church to worship. They have a tradition to start each service at 11:02 in memory of those lost in the atomic blast. However, even with this sober reminder, everyone was all very warm and welcoming to this American.

Finally, we ended our trip at Nagasaki Atomic Bomb Museum. Needless to say, it was tough to visit; but needful. There was so much that I didn’t know. It was surprised to learn that Nagasaki was not the primary target but chosen in-flight because of cloud/smoke cover over the primary target. Also, that ground zero was Urakami, the home of the hidden followers. With such coincidences, it left me wondering why should such a thing happen to Nagasaki.Â

One of the final exhibits was the story of Dr. Takashi Nagai who was known as the “saint of Urakami.” Although he survived, his wife was in town at the time of the blast. Later, he could only identify his wife’s carbonized body by the rosary she was wearing. And as he in grief held her remains, he later wrote that, her voice seems to murmur: forgive, forgive. Although his body was already suffering from leukemia and then damaged by the blast and radiation sickness, Dr. Nagai still used the last few years of his life to the physical and emotional healing of the victims and also as a prolific writer.

In light of the brief history lesson I received that weekend, I see Nagasaki now as city that has bared untold sorrows but still persevered and even thrived. So, this seems a fitting closing verse.

For this is a gracious thing, when, mindful of God, one endures sorrows while suffering unjustly.
– 1 Peter 2:19 (English Standard Version)